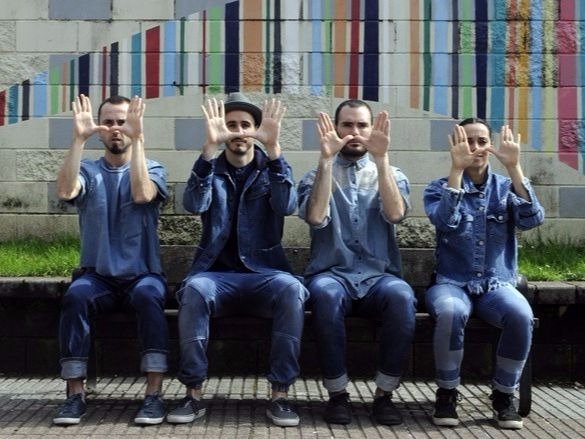 The Institute has also organized the "Basque Arts-Etxepare" stand, which will be attended by companies such as Shakti Olaizola, Malas Compañías, Kukai Dantza, Infinita Escena or Kalakan. The trio Kalakan will offer an a cappella performance at the stand on October 5th. On the 7th, the public will be invited to the stand for an aperitif and a glass of txakoli (young white Basque wine).

Kukai Dantza will perform in Manresa with the Catalans Brodas Bros to present the show Topa on October 6th. Four dancers gather in a square. Some of them are trained in traditional Basque dance and the others are hip-hop experts. They share the street as a natural location for their creative expression. Topa brings together the young dancers in an energetic and life-affirming ensemble, enriched by their contrasting artistic origins of traditional dance and urban culture.

Helena Lizari and Laida Aldaz will perform the show Kirolak (8 Basque sports) on October 6th and 7th. After living oversees for many years, the choreographers Helena Lizari and Laida Aldaz have discovered that distance enables people to understand what lies on their doorstep. Now, they’ve come back to their place of origin to discuss this idea through dance. Using movement, the choreographers reinterpret time-honoured rural Basque sports, which define local identity.

Finally, on October 7th, Juan Mari Beltran will present Paseos por los sonidos. The musician, researcher and promoter will offer a personalised recital in which he reveals his passion for traditional music and knowledge of instruments from the Basque Country. Two great musicians will join him on stage: Ixiar Jauregi on the txalaparta and Errege Belda on the accordion.

FIRA Mediterrània Manresa has been held annually since 1998 and has become a framework for exchange between professionals who buy and sell shows. The artistic programme is based on two key areas: popular culture and world music.