Featured events of the month

The show "Barro Rojo" of Javier Liñera, in Chile

The companies Organik and Ertza at the fair Fira Mediterránia Manresa

The play Andre and Dorine comes back to Madrid!

After four years of international tour, the Basque theatre play André and Dorine, that has travelled around 20 countries and 3 continents, comes back to Madrid for its second season.

Minority Arts. No Minor Issue! Seminar at the European Parliament, with the participation of the Basque Culture!

Arts and culture are important to any group in terms of identity, policy and visibility. For linguistic minorities, arts linked to language are essential – but often challenging due to a relatively small immediate audience. However, this art could be of interest to any audience. World-class literature can be written in minority languages, and world-class theatre productions can premiere in any language. What possibilities can the EU offer for the smaller literature and theatre fields throughout Europe? And what are the challenges?

This year the event, titled  Minority Arts. No Minor Issue. Support for Culture in Minority Languages, will be held on March 4 at the European Parliament  –Alitero Spinelli Building, Brussels-. And the Basque culture will have it own place in the program: the writer  Kirmen Uribe  and Mari Jose Olaziregi, Director for the Promotion and Dissemination of the Basque Language of the Etxepare Basque Institute, will lecture about Basque literature translation and dissemination in a round table with  writers and representatives from Switzerland and Finland that will be guided by Alexandra Büchler, Director of  Literature Accross Frontiers.

The show "In Between" in AlhóndigaBilbao 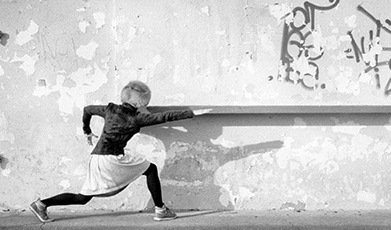 With an agreement between AlhóndigaBilbao and the Etxepare Basque Institute, the annual program Amphitryon has been launched, which promotes a regular program of live arts, facilitates the mobility of artists and the internationalization of local proposals. Amphitrion will start on January 17 with the show In between.

The dancer Olatz de Andrés will take part in the NO BALLET International Choreograohy Competition, in Ludwigshafen, Germany. She will travel with the support of the Etxepare Basque Institute on November 22-23.

On the other hand, on December 2-4 she will take part in the Festival Salmon Barcelona.