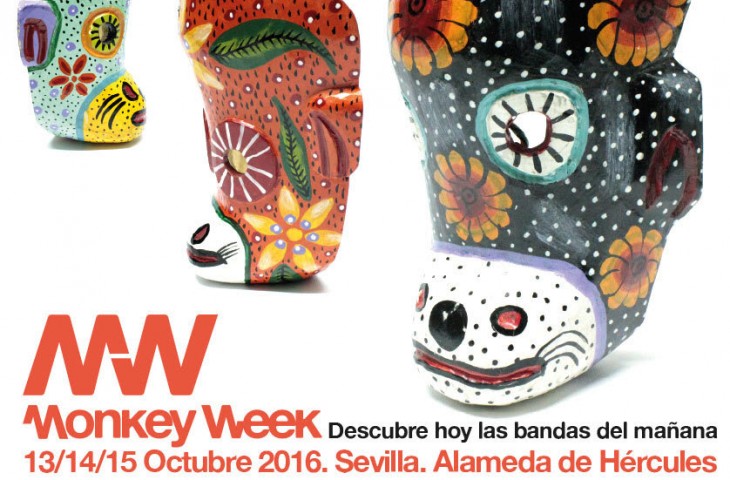 Thanks to the agreement between Basque Music(Euskal Herriko Musika Bulegoa, the Etxepare Basque Institute and Euskadiko Soinuak - Basque Government) and the Monkey Weekfestival, in the this year’s edition of the festival, to be held for the first time in Sevilla,  Basque bands will have the opportunity to perform in different scenarios during the 14th and 15th October.

A new edition of the Bernardo Atxaga Chair is about to begin, with the opening of the academic program starting on October 5 at The Graduate Center of the City University of New York (CUNY). The Professor of the University of Massachusetts Amherst Jacqueline Urla and the doctor and professor at the University of Deusto Esti Amorrortu Gómez will teach he seminar "Language Ideology and Political Practice in Basque Language Revival", which will run from 5 to 7 October. They will also offer the conference "Becoming an active Speaker: the Case of Young New Speakers of Basque" on October 7, at 6:30 pm.

This seminar will bring together sociolinguistic, linguistic and anthro-political perspectives on Basque language revival strategies. Standardization and the acquisition of new speakers have been two key strategies in the social movement to guarantee the future of the Basque language.  The seminar will look critically at ideological frameworks, values and sociolinguistic conditions that have shaped these strategic foci. 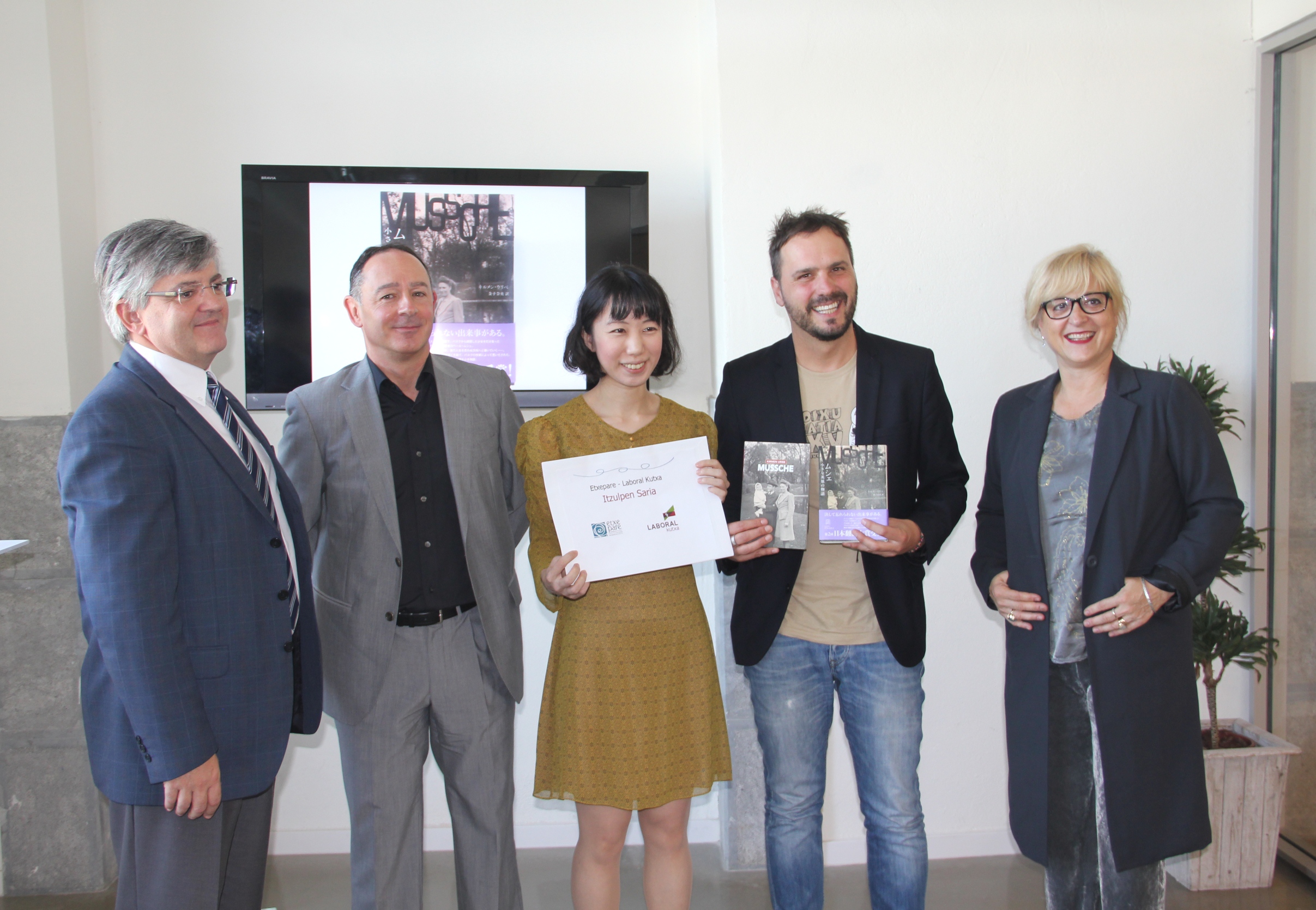 This Translation Prize, created last year by the Etxepare Basque Institute and Laboral Kutxa, has been presented today in its second edition, coinciding with the International Translation Day. The award recognizes the translation of a literary work written and published originally in Basque, and as announced today, the winners this year are the Japanese publisher Hakusuisha and the translator Nami Kaneko, for the Japanese translation of the novel  Mussche by Kirmen Uribe.

The William A. Douglass Chair is inaugurated in Masachusetts 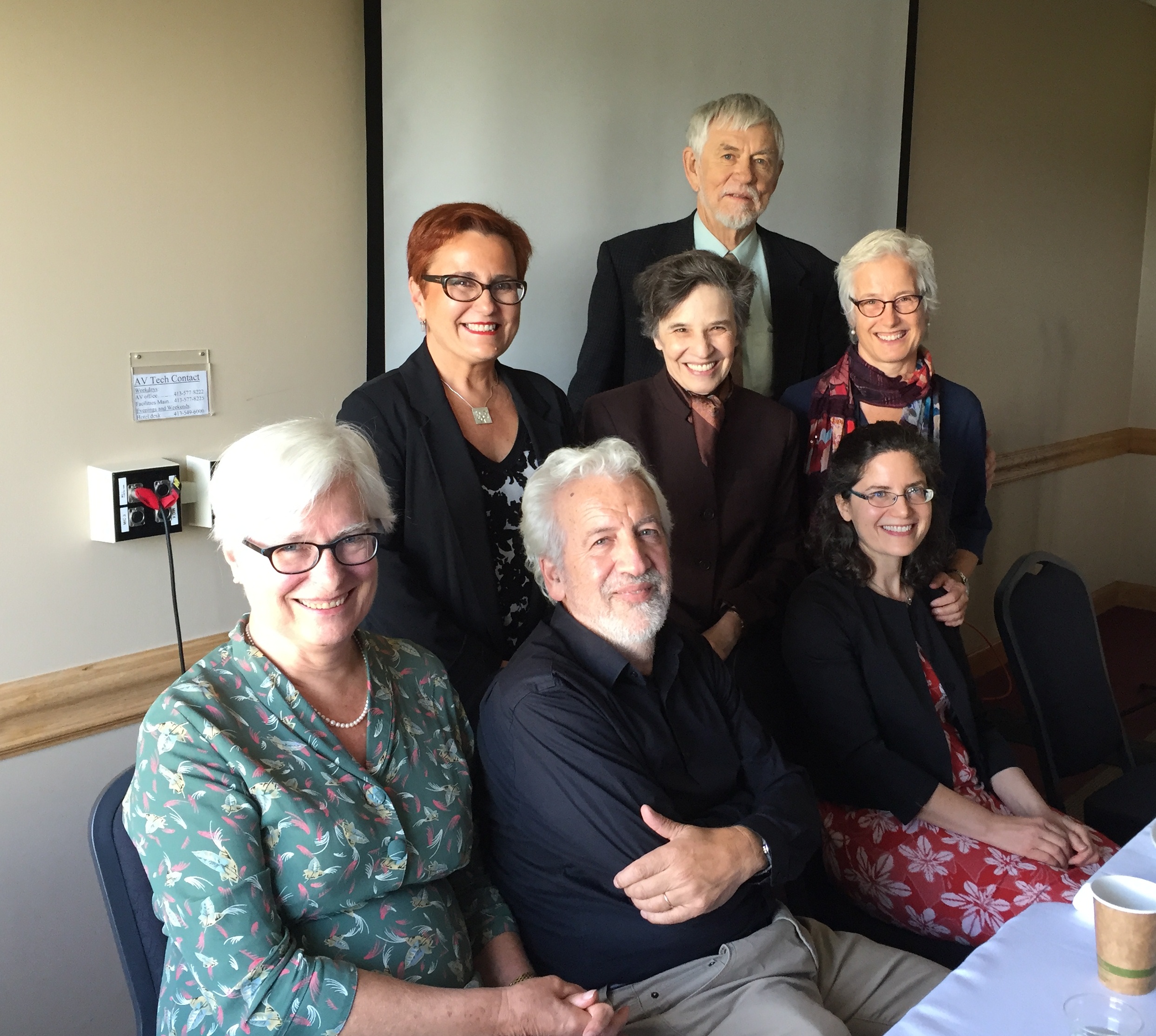 The William A. Douglass Chair in Basque Cultural Studies, created this year by the Etxepare Basque Institute at the University of Massachusetts Amherst, was inaugurated on 26 September with a relevant academic program.

In the memorable inaugural conference of the Chair that bears his name, William Douglass was accompanies by his family and to the heads of the university, including the Provost. In the event, Mari Jose Olaziregi, responsible for the universities area at the Etxepare Basque Institute, recalled the biography of Douglass and its many facets: anthropologist, writer, hunter, fisherman ... She highlighted the prestige he enjoys in Euskal Herria and the recognitions he  has achieved there. And she also stressed the importance of the contributions that this chair will make in the future. 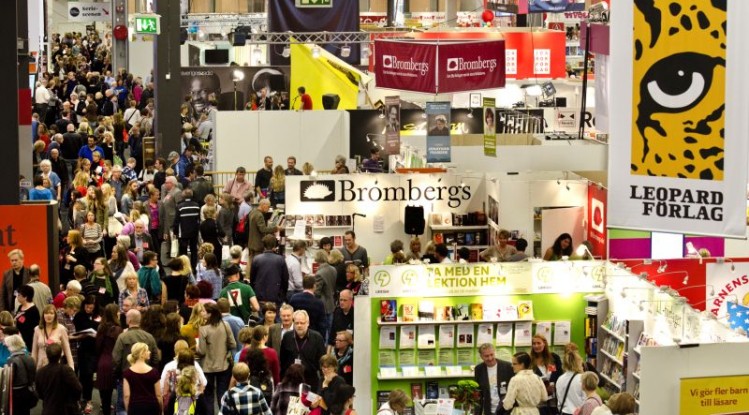 The literary fair Göteborg Book Fair, the most relevant of Scandinavia, has been organized from 22 to 25 September. This year, the Basque author Karmele Jaio will attend the fair and be part of the official program, thanks to the support of the Etxepare Basque Institute.

On September 23, the author will participate in a round table with the writers Delphine Vigan (France) and Kristina Sandberg (Sweden): "Whose Rules: Mental, Physical, Political". After that, she will offer a poetry reading. The following day, the writer will lead the symposium "Women in Contemporary Basque Fiction Literature".She will analyze the case of Basque women writers through Karmele Jaio’s work. Her writing proposes a deep reflection on the role of women, a deep resistance to traditional “duties” like motherhood, with a style that tries to deconstruct a literary language that is usually foreign to women.

The Göteborg Book Fair is a four day long literary festival, a fantastic mix of books, authors, book-lovers, knowledge and joy. The days are filled with literary events, poetry readings, interesting discussions and debates on almost every conceivable topic. New books are presented at the many stages and exhibitors’ stands and deals are closed at the International Rights Centre.

The William A. Douglass Chair will open on September 26 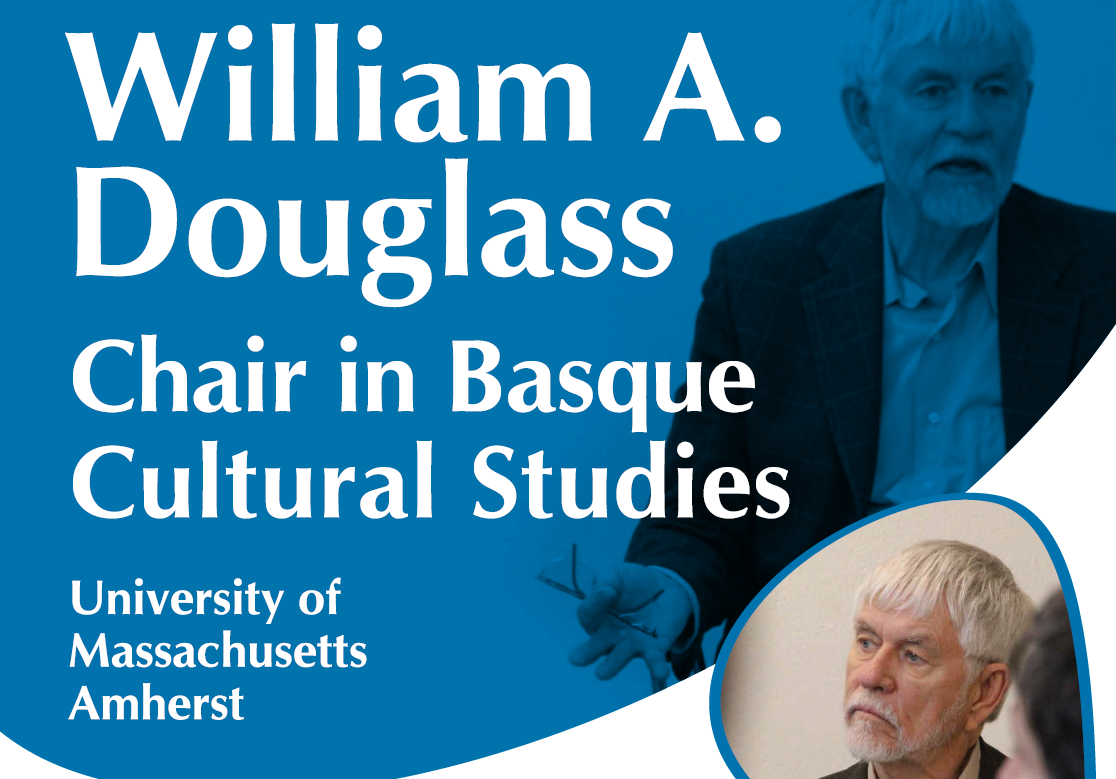 The William A. Douglass Chair in Basque Cultural Studies, created this year by the Etxepare Basque Institute at the University of Massachusetts Amherst will open on September 26.

This new chair will be dedicated to promoting the Basque Anthropology Studies, and will organize an annual conference and a seminar on this subject. The first edition of the conference will be dedicated to the work of Douglass himself.  In addition, Jackie Urla, Professor of the Department of Anthropology, will create the subject "Culture and Heritage in Europe", which will deal with special attention the history of the Basques.

The chair will open officially on September 26,  with a Inaugural Lecture by William A. Douglass. The very same day the university will hold the international symposium "William Douglass, Basque Studies and the Anthopology of Europe", with the participation of the experts: Caroline Brettell, Susan Carol Rogers, Sharon Roseman and Joseba Zulaika. The Etxepare Basque Institute will be represented by Mari Jose Olaziregi, director for the Promotion and Dissemination of the Euskera and responsible for the area of universities.

In memoriam Ferenc Ribary, a Basque Studies Symposium in Budapest 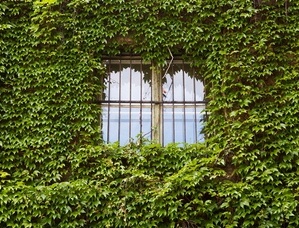 On 22 and 23 September, the ELTE  University of Budapest will hold an important international conference, entitled The Basque Studies in Hungary: In memoriam Ferenc Ribáry. With this symposium, the university wants to commemorate the 150 aniversary since Ribáry, who was a professor at the university, wrote the Basque Grammar  Hungarian A baszk ismertetése nyelv (Presentation of Euskera), written in Hungarian, that was one of the first to be written abroad .

The program, promoted amongst others by Oxel Uribe-Etxebarria, Basque Language and Culture reader of the Etxepare Basque Institute at ELTE University, provides a relevant academic program to be held on September 22: a panel of international experts will offer different lectures and presentations, in which, besides analyzing Rivárys’s  Basque Grammar, issues such as the study of the Basque Language in the nineteenth and twentieth centuries in Europe, the teaching of the Basque language in Hungary or the literary and cultural exchange between Hungary and the Basque Country will be discussed (see the whole program attached). The first Hungarian-Basque vocabulary will also be presented by their authors, Károly Moravay, Izaskun Pérez González and Oxel Uribe-Etxebarria. 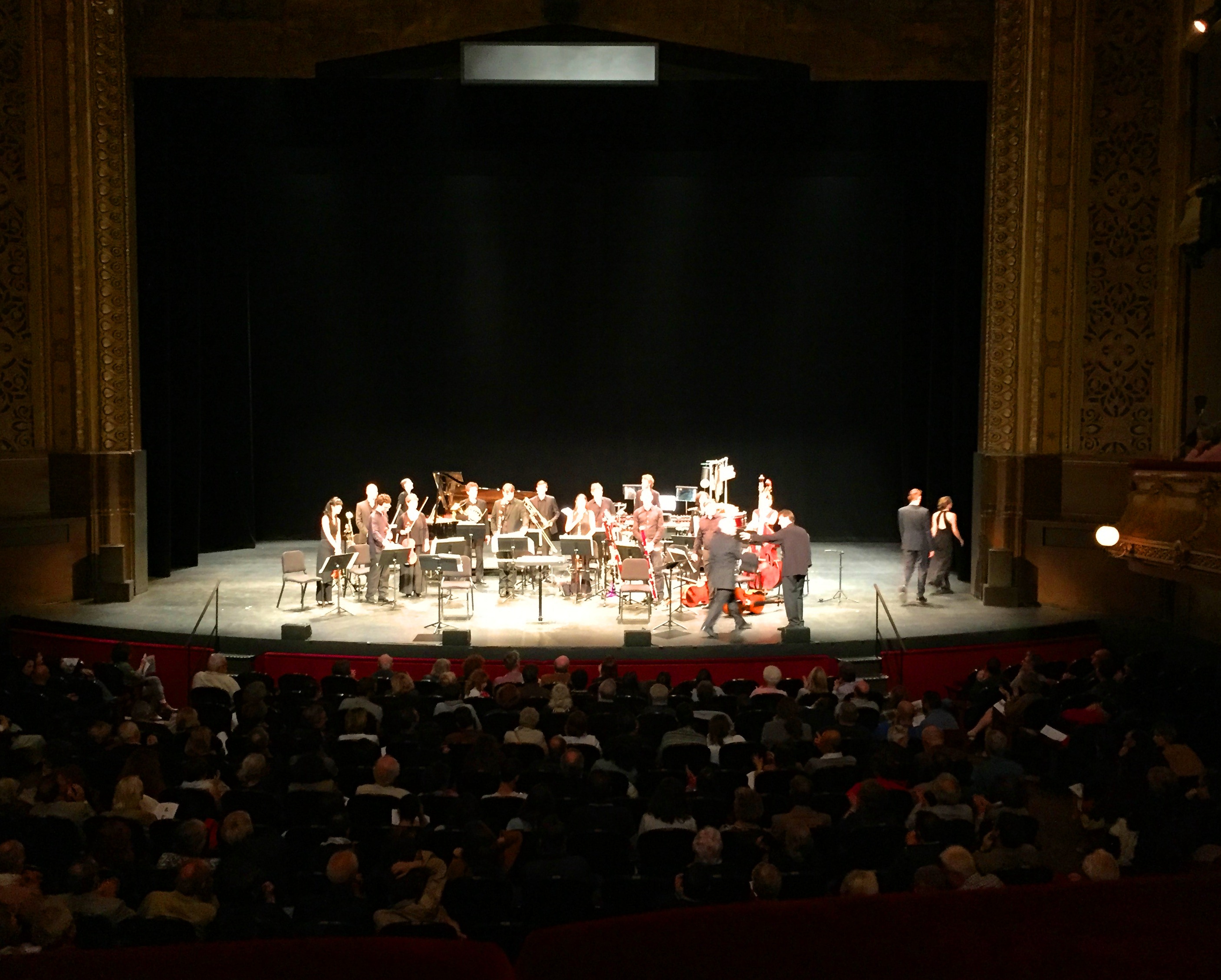 The traditions kept in Soule-Zuberoa, the music of Maurice Ravel and this as an inspiration for a new composition by Ramon Lazkano are the elements that compose Ohiberritze, representation that premiered last Saturday in Paris at the Festival D’Automne à Paris . And the audience, which filled to the brim the emblematic Théâtre du Châtelet, surrendered to the show.

Ohiberritze, that has traveled to Paris with the help of the Etxepare Basque Institute, the Olaso Dorrea Foundation and EKE, is divided into four parts. To begin with, they  the scene was occupied by 80 performers come from Atharratze-Sorholüze (Soule) to offer a small but powerful version of the pastoral Jean Pitrau, written by Pier-Paul Berzaitz. Then the Trio Dali played the Trio for violin, cello and piano in A minor, a work of great beauty composed of Maurie Ravel in zortziko rhythm, which reveals traces of traditional Basque music present in the work of the composer from Ciboure .

Then came the premiere of Ravel (Scenes) by Ramon Lazkano, who had aroused great expectations. This new composition, which has received the support of the DSS2016 Foundation and Kursaal Eszena, is a fragment of the opera Lazkano is writing,  based on Ravel  by Jean Echenoz, 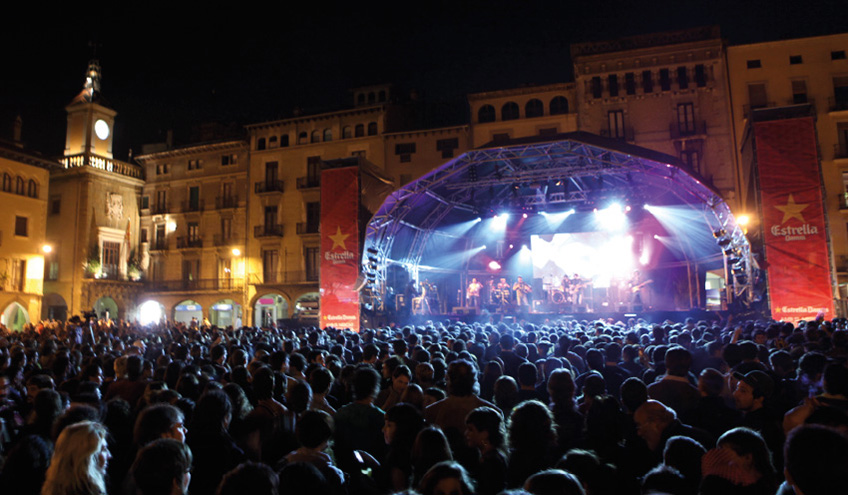 Euskal Herriko Musika Bulegoa, the Basque Institute Etxepare and Euskadiko Soinuak (Deputy Ministry of Culture of the Basque Government), are working togehter to coordinate and collaborate on the outside dissemination of the Basque music under the brand ´Basque Music´.

As a result of this collaboration, between 14 and 18 September they are participating in the 28. Mercat de Música de Vic (Barcelona).

The main objective of these Basque entities is to present this year´s festival Euskal Herria Sona, to be held in Barcelona in the autumn of 2016, and this year celebrates its 19th edition. For it will be attended by representatives of the Basque Center of Barcelona

As in previous editions, the fair will present several Basque artists. Throughout these years, the presence of Basque music in the Mercat has been continuously appearing live at the Mercat about 60 Basque artists, this year the ambassadors of our music will Amorante, Malandro, and Kepa Junkera, which offer a special recital accompanied by several of his sorginas with the Brothers Cubero.

Haizea Barcenilla, chosen to develop an artistic residency at the AIT in Tokyo 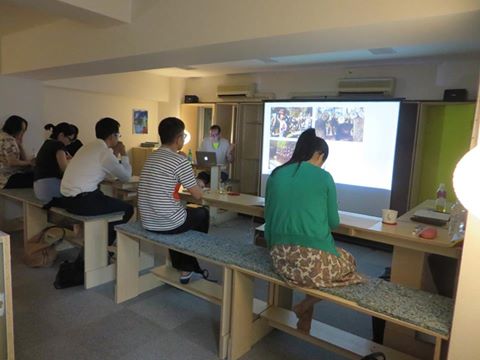 "The Eventual Common", by the artist Haizea Barcenilla, has been chosen in the call for the artistic residence at the AIT center in Tokyo.

The call is a joint initiative between Tabakalera - International Centre for Contemporary Culture and AIT - Arts Initiative Tokyo, with the collaboration of Spanish Cultural Action AC / E, the Etxepare Basque Institute, Eu Japan Fest and The Agency for Cultural Affairs Government of Japan . It aims to expand and promote the exchange of knowledge and experience between the Basque and Japanese artistic context.

Since the deadline for submission of proposals in late July opened, they have received a total of 15 projects, 7 and 8 presented by Japanese commissioners by Basque commissioners.

According to the commission of mixed valuation, formed by Tabakalera and Arts Initiative Tokyo, both the proposals by Haizea Barcenilla and Maki Nishida meet the quality and conditions necessary to be beneficiaries of the residences, and the trajectories of both applicants have the necessary solvency to develop the projects and make the most of the exchange in the context of the program.