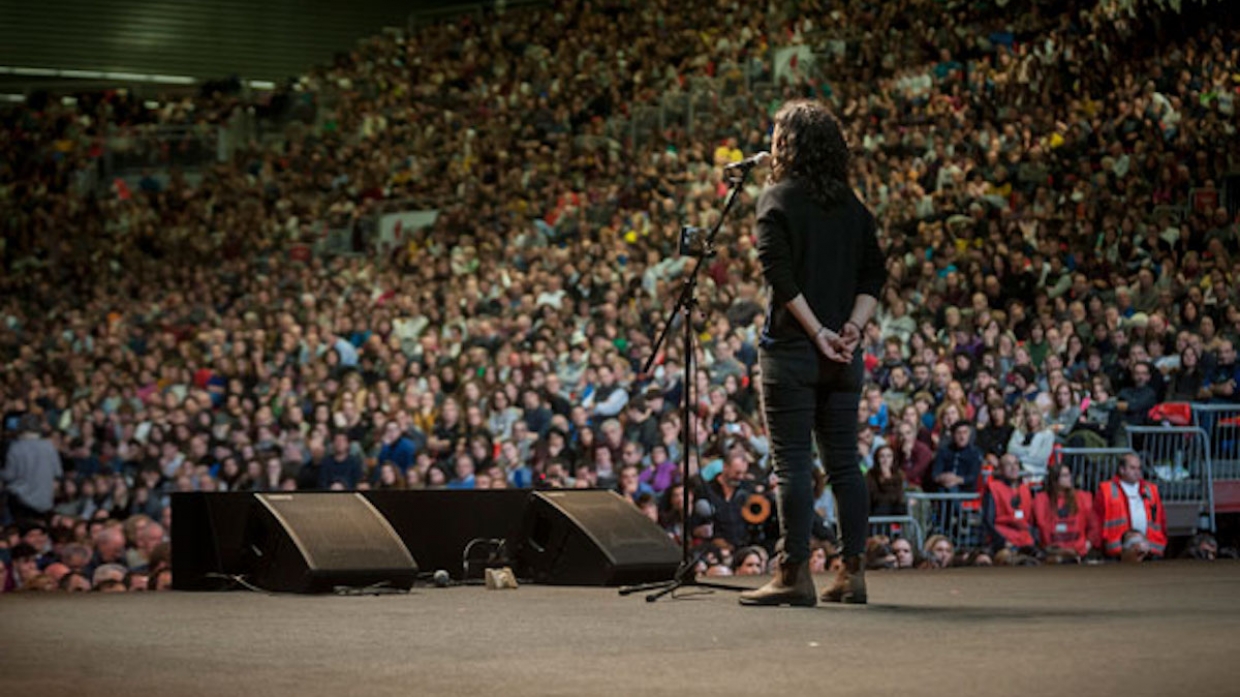 Bertsolaris invent the world through improvised song. Bertsolaritza refers to both the art of inventing bertsos and the social movement created around it. A bertso is not a simple line in a stanza but the whole stanza itself. Bertsolaritza is a thriving art today and enjoys great social prestige in the land of Euskara. The best proof of its vitality is an event that draws massive crowds: the national bertsolari championship final. Held every four years, the competition has audiences of 15,000 enraptured for hours. In the past this art of improvisation was traditionally studied from the perspective of literary critique. However, at the dawn of the twenty-first century, the paradigm has shifted and it is now understood as a rhetorical genre. The aim is not to improvise literature of great literary merit but to elicit an emotional response from the audience. Therefore, bertsolaris are agents of emotion.

Bertsolaris combine poetry, humour and current affairs. They improvise, relying on a specific melody sung a capella and provoke each other based on a theme put forward by the gai jartzaile (the emcee or theme-presenter). The performance of bertsolaris can take place in any large or small enclosed area, such as a theatre, pelota court or around a table in a restaurant. Performances can also be outdoors, in a kiosk, a town square, or even from one balcony to another. In addition to competitions, the formats themselves have become increasingly diverse.

The Basque tradition of improvisational singing dates back at least to the fifteenth century. And although we know it existed, there is little concrete evidence until the nineteenth century. Bilintx, Xenpelar, Otaño and Etxahun stood out as the great bertsolaris of the nineteenth century, owing mainly to their written work. In the twentieth century, written bertsolaritza gave way to improvised bertsos. Formal real research into this genre began in 1905. Fundamental to this work were figures such as Manuel Lekona and his nephew Juan Mari Lekuona. In the years prior to the Spanish Civil War, the ´Basque renaissance´ saw bertsolaritza take a more prominent role in Basque culture, spearheaded by Joxe ´Aitzol´ Ariztimuño, among others. The first Bertsolaritza Championship took place in 1934. Jose Manuel ´Txirrita´ Lujanbio was the paradigmatic bertsolari of the time. But with the war came silence. Starting in 1945, Iñaki ´Basarri´ Eizmendi and Manuel ´Uztapide´ Olaizola made sure the art of bertsolaritza would survive, as did the Enbeita brothers in Bizkaia. In 1960, Euskaltzaindia, the Basque Language Academy, restarted the competition. Jose Manuel ´Lazkao Txiki ´ Iztueta and Fernando ´Xalbador´ Aire were two legendary bertsolaris of the time.

In the 1980s, Xabier Amuriza laid the foundations of the art as we know it today. Amuriza was the first to sing in Euskara Batua (standardized Basque), his verses striking an emotional chord in the audience. Together with Amuriza, a new group of bertsolaris rose to prominence, among them Sebastián Lizaso, Anjel Mari Peñagarikano, Xabier Euskitze, Jon Sarasua and Andoni Egaña. No bertsolari has won as many txapelas – the beret awarded to winner of the bertso championship – as Egaña. With Egaña came a new way of understanding bertsolaritza. Improvisational strategies and resources began to be planned. The most outstanding figures of the following generations of bertsolaris are Maialen Lujanbio and Amets Arzallus. The list of bertsolaris has continued to grow. One of the features of bertsolaris who improvise in front of audiences today is the search for their own register. The references are infinite, and the themes put forward increasingly sophisticated. Women constitute a growing presence in the art.

It is not by chance that the quality and diversity of bertsolaris is constantly improving. It is the result of the tireless work of the Bertso Eskolas (bertsolari schools) and the efforts made in compulsory education. And, to a large extent, thanks to the immeasurable work of the Association of the Friends of Bertsolaritza Bertsozale Elkartea.