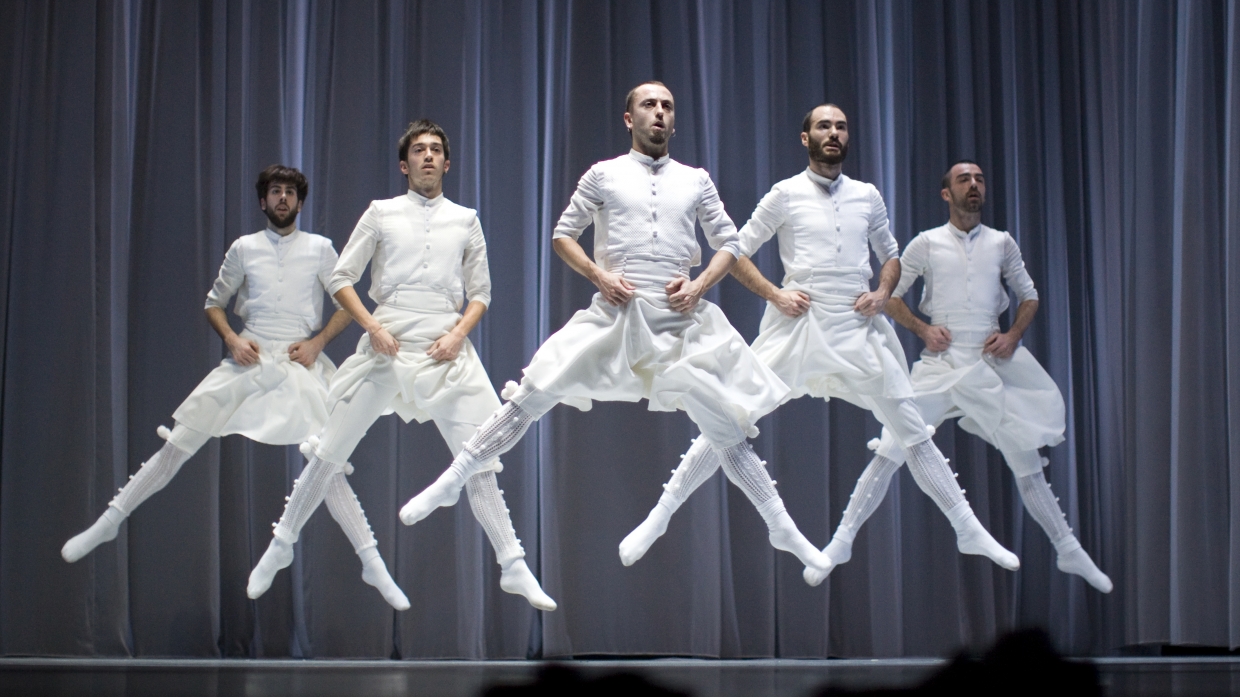 Basque dance reaches out to the world. Our dancers showcase their talent on local and international stages in a rich tapestry of choreographies and performances across traditional, classical and modern Basque dance. Biarritz is the Basque capital of dance bar none. The National Centre of Choreography and the Malandain Ballet Biarritz are based in Biarritz, which is also home to the Maitaldia Dance Festival. The Dantzaz dance company, supported by the Basque Government, is a breeding ground for up-and-coming talent whose contemporary dance performances can be enjoyed throughout the Basque lands. Biarritz may be the Basque capital of dance, but town squares in every village take front stage with the arrival of winter, carnival and local festivities. There´s a wide variety of folk and traditional dances from across the Basque region: maskaradas from Zuberoa, Carnival in Lantz, the ezpata-dantzak sword-dances of Legazpi and Markina-Xemein, the trokeo-dantzak dances with sticks and shields of Durangaldea and the aurresku, originally a line or circle dance (soka-dantzaI), which has now become the quintessential Basque dance of honour. Many of these dances share traits with other European traditions while also having their own unique characteristics.

Basque dancers have made great efforts to keep their dances alive. Romanticism and nationalism were once the driving forces behind this desire to preserve a disappearing folk legacy. In 1927, Segundo Olaeta created a Basque dance group in Gernika called Elai-Alai. Around the same time, the Basque priest Resurrección María de Azkue and the priest and musicologist José Gonzalo Zulaika (better known as Aita Donostia) were busy researching and compiling traditional Basque dances. Creative avant-garde artistic expressions soon reached our shores as well. This cultural effervescence was cut short by the Spanish Civil War, but even while forbidden, the echoes of Basque music and dance continued to resonate. In France, the Basque government-in-exile created Eresoinka, a kind of music and choreography ambassador. The group brought together Basque singers, musicians and dancers, and toured many European cities.

In the 1960s Basque culture experienced a new awakening. Sculptor Jorge Oteiza created the Basque School of Contemporary Art; the cultural movement Ez Dok Amairu brought together Basque tradition and avant-garde in the field of music; and Argia changed the panorama of traditional Basque dance forever. Under the direction of Juan Antonio Urbeltz and Marian Arregi, Argia marked a revolution in dance. The group researched local traditions and combined authenticity and brilliance to bring village dances to theatres and promote new choreographies. In 1988, they premiered Zortziko, a show created as a synthesis of traditional Basque dance. Based on the experience of Argia, in 2018 director Telmo Esnal released Dantza, a documentary that was met with great success. José and Concha Lainez also played a vital role in the 1960s in bringing contemporary dance to our land. With the dance groups Anexa and Yauskari, they introduced a kind of dance that was little known here before then. Meanwhile, in Iparralde (Northern Basque Country), Mizel Theret was putting together the group Ekarle.

A number of small groups have emerged over recent decades. Based on folk dances, they have added other distinctive features including a nod to classical ballet, a combination of song and dance, and using dance to tell a story. Perhaps the most outstanding are Aukeran, founded by Edu Murumendiaraz, and Kukai, created by Jon Maya. In the area of classical ballet, several Basque dancers have enjoyed success on the international stage: Itziar Mendizabal is first soloist of the Royal Ballet, London; Asier Uriagereka dances with the Monte-Carlo Ballet, and Igor Yebra is artistic director of Uruguay´s National Ballet Company. Today, Asier Zabaleta, from the dance company Ertza, is perhaps the best-known name in contemporary Basque dance; Damián Muñoz, Idoia Zabaleta, Matxalen Bilbao and Olatza de Andres are also essential names in today´s modern dance scene.