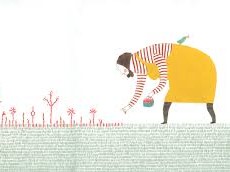 Odriozola is a two-time winner the Euskadi Prize (2009, 2013), as well as receiving the National Illustration Prize in 2015 and the Gold Medal at the Bratislava Biennial. Odriozola has just launched her own publishing house: Editorial Modernas El Embudo.

On March 30, the prestigious Bologna Children´s Book Fair will announce the names of the winners of the Andersen awards, one writer and one illustrator. The jury chaired by Junko Yokota shortlisted another five names: Isabelle Arsenault (Canada), Seizo Tashima (Japan), Iwona Chmielewska (Poland) and Albertine (Switzerland).

Thirty-six illustrator nominees came from IBBY member nations around the world. Odriozola’s name was sent to Spanish Organization of Children’s and Youth Literature (OEPLI) by Galtzagorri Elkartea. The awards will be presented at the 37th IBBY Congress in Moscow next September.

The criteria used to assess the nominations is based on the authors’ entire body of work. In particular, the aesthetic and literary quality as well as freshness and innovation; the ability to engage children and to stretch their curiosity and creative imagination, and the diversity of aesthetic resources used.