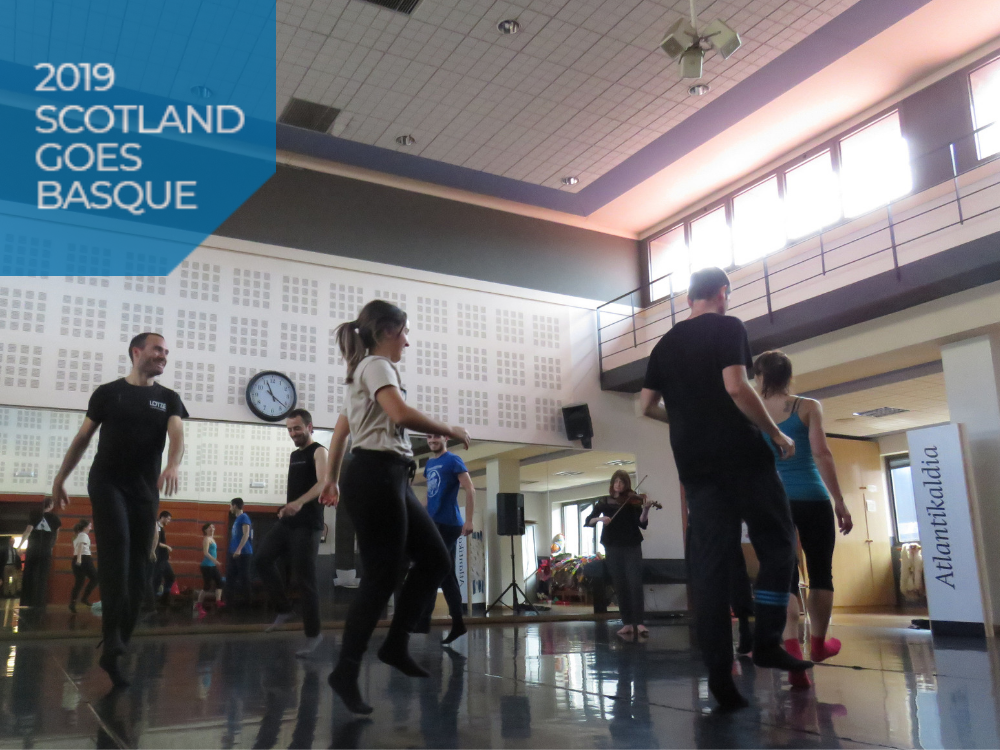 Kulturklik sat down with Irene Larraza, director of the Etxepare Basque Institute, and Alain Maya, dancer, choreographer and project advisor, to ask them about the ‘Atlantik 1050’ project, a show featuring Basque and Scottish dancers and musicians. ‘Atlantik 1050’ falls under the framework of #ScotlandGoesBasque, an initiative promoted by Etxepare to shine a spotlight on the Basque language and culture. Below is a transcript of the interview:

This year the Etxepare Basque Institute is developing activities under the banner of the #ScotlandGoesBasque project that involve Basque and Scottish cultural creation. What is the purpose of the programme?

Irene Larraza: The primary purpose of the Etxepare Basque Institute is to raise the international profile of Basque culture, creative talent and the language itself. And to increase visibility, we’ve started down a new path, promoting activities that will have a great impact in a particular country.

In 2019 we are doing this in Scotland. What the #ScotlandGoesBasque programme seeks is to make Basque cultural talent known in Scotland and, at the same time, strengthen bond through culture, art and language.

Much like us, Scotland has a very strong and rich cultural identity. We share a sense of pride in our roots. And, above all, Scotland had a very dynamic culture and world-renowned cultural festivals. Therefore, it is a unique opportunity to showcase Basque cultural creativity.

That’s precisely the idea of ‘Atlantik 1050’. How did it come about?

I.L.: We organized the groups that would attend Edinburgh Festival Fringe in collaboration with Dance Base, Scotland’s national centre for dance. They came to the Basque Country and after seeing the work that had been created, they decided on the programming for the festival.

In addition to selecting different proposals for the festival programme, they also showed great interest in traditional Basque dance. Since the two countries have a very rich and original traditional dance repertoire, they decided to merge the two through Dance Base and the Atlantikaldia festival of Rentería, whcih was also looking for a similar show. The result is ‘Atlantik 1050’.

Alain Maya: Yes, ‘Atlantik 1050’ came from a collaboration between the Etxepare Basque Institute and Dance Base. The organizers of Atlantikaldia contacted the Rentería dance group, Ereintza Dantza Taldea, and explained their idea. So, we’ve been shaping the project. I was asked to be responsible for the initiative and little by little we’ve been putting together the group of dancers, working on different ideas, working closer with with Dance Base ... in this way, all together, Ereintza Taldea, Etxepare, Atlantikaldia, Dance Base, and myself have moved the project forward.

How did you choose the work group? What criteria did you use?

A.M.: As for the selection of dancers, keeping in mind that the project is promoted by Atlantikaldia, the context had to set in Rentería. It was decided from the outset that the bulk of the dance group would be members of Ereintza Dantza Taldea. Later, to maintain diversity, we got in touch with dancers from other villages, so now we have a very diverse group. In addition to the Ereintza dancers, there are also people from Oiartzun and Zumaia, and two dancers from Elizondo in Navarra. We have two txalaparta players from Hernani and Donibane Lohitzune.

So, like I said, we have a quite varied group in terms of the origin of the dancers is and dance styles. That’s what we are after: taking diversity to the stage.

Before designing the choreography, you did research gave thought to traditional Scottish and Basque dance. How did that go?

A.M.: The first thing we did to prepare the project was to exchange written information and videos with Jen Wren, dancer and the project’s choreographer and artistic director. We shared videos and texts so that she could learn about traditional Basque dance and I could do the same with Scottish dance. And then in June the Scottish contingent came here for the first time.

Our purpose here was to provide them with information about traditional Basque dance so that they could see what type of dances they are. They got to see a performance by Ereintza Dantza Taldea and held a workshop with them. They saw the ‘Zuberoako Maskarada’ performed by the Elkartasuna dance group from Pasajes. They held another workshop with Kukai Dantza Taldea, and so on. We had the opportunity to put it to music since, along with Jen Wren, we also visited by violinist Ammy Geddes, who was in charge of creating the music for our performance. She wanted to see what kinds of rhythms and music we used, so we got to it. From there, little by little we began to work on different ideas. We immediately realized that the two styles shared some of the rhythms or at least were very similar. There were also many similarities in the movements and dance steps. So we used these similarities to begin creating the choreography step by step.

We’re still at it. Now, our relationship is virtual. That is, we work mainly by phone or video. I also continue to work with my group here and she works with her Scottish group. For now, that’s how we’re doing things.

Next week I go to Edinburgh for four days and have the chance to work with the dancers and reinforce the connections, and see how we can include our style in their dances and vice versa.

So, this show seeks a symbiosis between traditional Scottish and Basque dance, but using contemporary stage language. What do you expect by joining these two disciplines?

A.M.: Well, I think nowadays people are much more aware of traditional Basque and Scottish dance. We have a lot traditional dance dance groups here. In pilgrimages, village festivals, town squares ... It’s all around us so that means that Basque dance is in fact contemporary. The same thing holds true for Scottish dance.

We’ve taken advantage of the two styles to create ‘Atlantik 1050’ and that means that the show is contemporary, of course. We’ve used two traditional languages and have made our small contributions, such as movements, clothing ... we’re still putting those details together but it’s clear that the show is created from a contemporary perspective. I think that activities like this make traditional dance grow. In this sense, our performance will be very enriching.

‘Atlantik 1050’ will premiere at two very significant street show festivals, the Edinburgh Festival Fringe and Atlantikaldia of Rentería. Taking into account the characteristics of each, what will these two different scenarios bring to your work?

A.M.: Well, I think the two experiences will be really enriching.

I’ve never been to the Edinburgh Fringe but it’s well known and has a lot of impact. I‘ve heard and read a lot about it. In the area of street entertainment, it’s one of the biggest festivals in Europe, and the atmosphere is phenomenal. We’ll perform three times the same day. The performances will be on the street and at different times of the day. I think it’ll be very special, because we we’ll be able to see how well the combination of the Scottish and Basque dance styles is received. We also have to keep in mind that Fringe is a huge festival, and range of activities is huge and there are usually lots of people in the streets. We really want to see how our ‘Atlantik 1050’ will fit into that scene.

Six years have gone by since Atlantikaldia was first launched. This festival has a great atmosphere and is deeply rooted in the city. It also attracts lots of visitors. The festival does a great job of bringing together different styles of music and musicians from different cultural backgrounds. And the same thing goes for dance and other artistic disciplines. So, we’ll see how the public receives us. It’ll be a treat to see how the show is received both here and there.

It’s also true that we have no specific objective. I think that just starting this project is already a success and simply participating in the festival will be a wonderful experience. In fact, the whole process already is. It’s a unique opportunity to build those bridges that we talk so much about – the bridges that make connections between different cultures. We’ll have the opportunity to learn about and experience the Scottish culture, and they’ll have the opportunity to do the same with ours. With that alone we’ll already have gained a lot. What will come out of all of this? We don’t know, but it’ll surely be a very enriching and beautiful experience. We’ll take it.

In addition to this dance show, what other activities are scheduled for these weeks under #ScotlandGoesBasque?

I.L. In the second week of August a lot of Basque talent will be on show. Besides ‘Atlantik 1050’, Tio Teronen Semeak, Akira Yoshida, Krego-Martin Danza and the theatre company 2Theatre will take part in the Edinburgh Fringe festival from August 7 to 11. The Edinburgh International Book Festival is also held at the same time. Several writers from the Basque Country will be at the book festival, including Iban Zaldua, Harkaitz Cano, Miren Agur Meabe, Uxue Alberdi, Bernardo Atxaga and Eider Rodriguez. Danele Sarriugarte will also be there, as well as musicians Eñaut Elorrieta and Joseba Etxegoien. In total, 56 artists will travel with us.