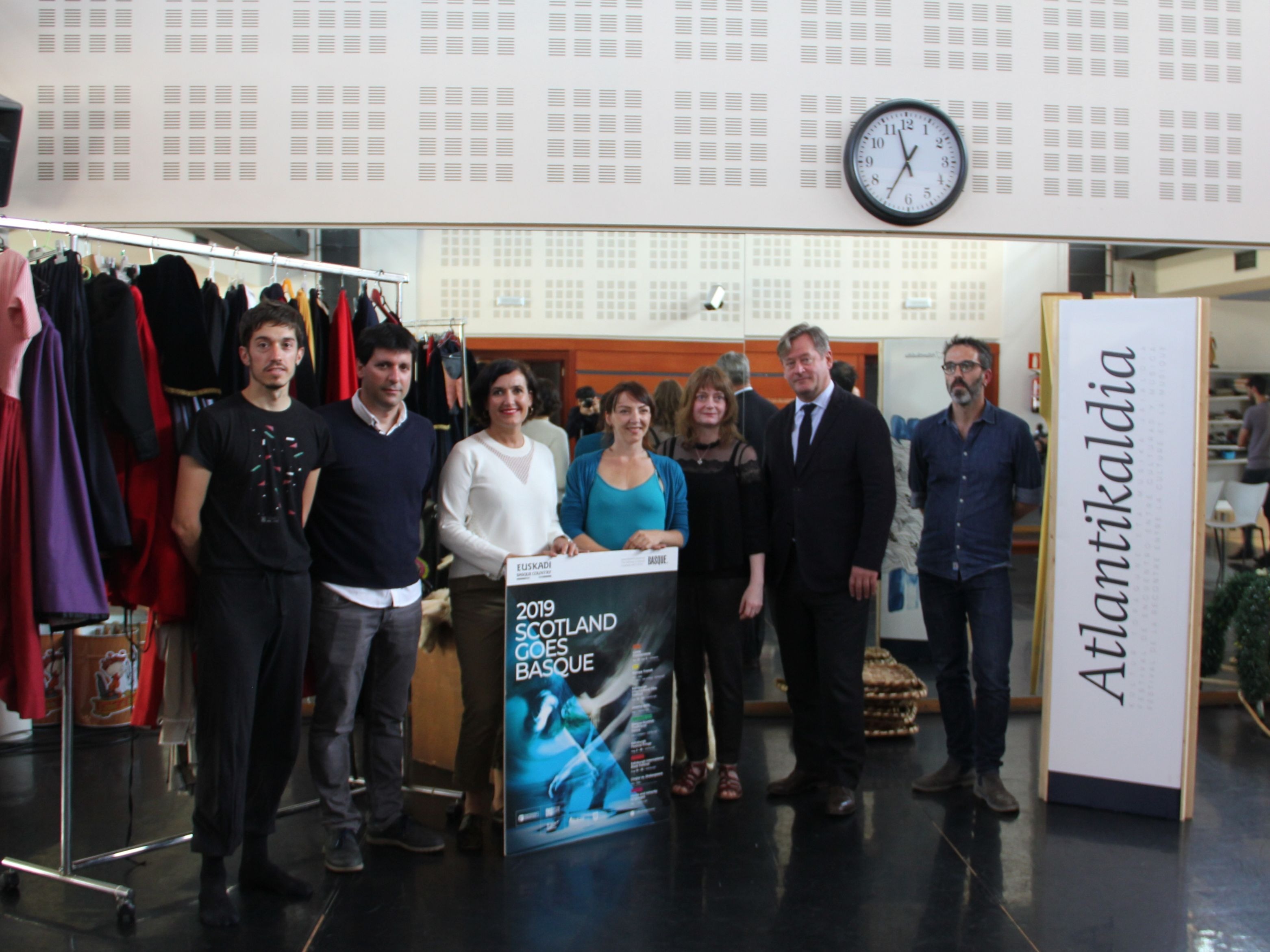 One of the next landmarks for the #ScotlandGoesBasque programme is to create an Atlantik 1050 street performance of traditional Basque and Scottish dance. The project is promoted by the Extepare Basque Institute, Atlantikaldia festival of Errenteria and Dance Base (Scotland’s National Centre for Dance).

Jen Wren, the project’s artistic director, and musical director Amy Geddes, are currently in the Basque Country working with Alain Maya. Representing the Ereintza Dantza Taldea dance group, Maya is serving as project consultant on traditional Basque music and dance. One of their working sessions was used to present Atlantik 1050 to the media. In attendance were Bingen Zupiria, Minister of Culture and Linguistic Policy for the Basque government; Irene Larraza, Director of Etxepare Basque Institute; Julen Mendoza, acting mayor of Errenteria; Iker Tolosa, director of Atlantikaldia, and the people in charge of the artistic aspects, Jen Wren, Amy Geddes and Alain Maya.

For centuries, the sea has been a link between Scotland and the Basque Country, and Atlantik 1050 will travel from coast to coast. The show will be created and presented in both Edinburgh and Errenteria. 1050 miles separate the two by sea, the precise distance that gave Atlantik 1050 its latest name. Originally the project was called Basque-Scottish Traditional Dance.

The working group chosen by Dance Base to create the show includes dancer and choreographer Jen Wren as artistic director and musician Amy Geddes as musical director; the Scottish dancers were selected by launching a call to people aged 16 to 25 who were familiar with Scottish dance. As for the Basque participants, Atlantikaldia turned to the Errenteria-based dance group Ereintza, who, in turn, designated one of their dancers, Alain Maya to serve as consultant to the artistic and musical directors with regard to traditional Basque music and dance. Maya will also be in charge of selecting the Basque dancers who will take part: “With Ereintza Dantza Taldea, we’ll have a sizeable group of dancers from different parts of the Basque Country.”

Jen Wren and Amy Geddes are now at work in the Basque Country; Alain Maya said that “this first al objective is to bring Jen Amy up to speed on Basque culture.” From July 22nd to 26th it will be Alain Maya’s turn to travel to Scotland to complete the show together with Jen, Amy and the Scottish dancers. “Some of the rhythms and movements are similar,” said Jen Wren, but but she plans to create something “totaly new”. Regarding  the creative process, Alain Maya explained that he “would underline two keys points: interrelation and communication. Interrelation because the project is a bridge between two cultures; and communication because dance is our language.” The result will be premiered in Edinburgh at the Festival Fringe on August 9th. Afterward, Atlantik 1050 will come back to the Basque Country and will take the stage on September 22nd at the Atlantikaldia festival in Errenteria.