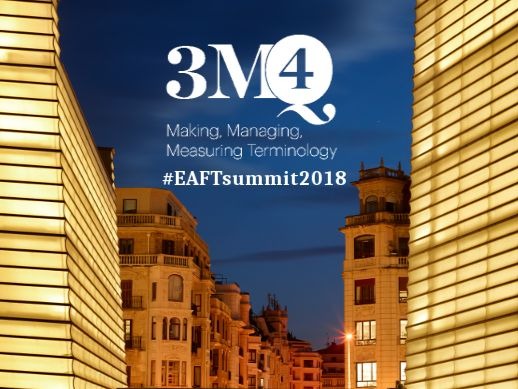 The Terminology Summit is held every two years in a different European venue. The event brings together all the European institutions and bodies working on terminology with the aim of creating a solid platform for terminology and multilingualism within the framework of the European Union.  This edition will be held in San Sebastian, at the Kursaal Congress Centre, on 22 and 23 November.

In terminology work, as in any other activity, it is vital to ensure the quality of the work that has been done, as well as measure the extent to which the outcome of that work has been successful.

This year´s summit will therefore focus on quality under the theme 3M4Q: Making, Managing, Measuring Terminology. In the pursuit of Quality, and experts from all over Europe will have the opportunity to discuss this topic, convened by the European Association of Terminology (EAFT).

This is the first time that a Basque city has hosted the EAFT Terminology Summit, which will bring together professionals from, among others, Norway, Finland, Slovenia, Switzerland, Sweden and Croatia, as well as Catalonia and the Basque Country. The event will contribute to making the Basque experience in the field of terminology known abroad. For example, the Basque terminologist Iker Etxebeste will talk about the employability of the technology developed by UZEI to quantify the implementation of terms.

The opening ceremony will be chaired by Estibaliz Alkorta, Director of Basque Promotion at the Department of Culture and Language Policy of the Basque Government, Henrik Nilsson, President of the European Terminology Association, and Jon Etxabe, President of UZEI. The thematic debate will be held over two days, with around twenty speakers from international organisations and companies expressing themselves in Basque, English and French. In total, more than a hundred professionals have registered for the Terminology Summit.

Within the framework of the Summit, the International Terminology Awards will also be presented, which reward every two years the best works in the field of terminological research, at master and doctoral levels. These prizes are given out by the EAFT in accordance with the verdict of an international jury formed by experts of recognized standing.

A summit conceived from collaboration, on the threshold of Euskaraldia

UZEI is a member of the European Association of Terminology EAFT, which has allowed this year´s Terminology Summit to be held in San Sebastian. To this end, UZEI and EAFT have had the support of the Basque Government, the Basque Institute for Public Administration (IVAP), the San Sebastian City Council and the French Government.

Likewise, and as a result of the collaboration of UZEI, EAFT and the Etxepare Basque Institute, an event has been organised for the participants in the summit, called "First steps in Basque language: a city walk in San Sebastian", which will take place on 22 November, consisting of a walking tour of the city during which a basic knowledge course on Basque will be given in the official languages of the Summit (English and French). This event also includes a visit to the Etxepare Institute, where attendees will have the opportunity to show their support for Euskaraldia (an initiative that encourages people in the Basque Country to use Basque more often) which will begin the following day.