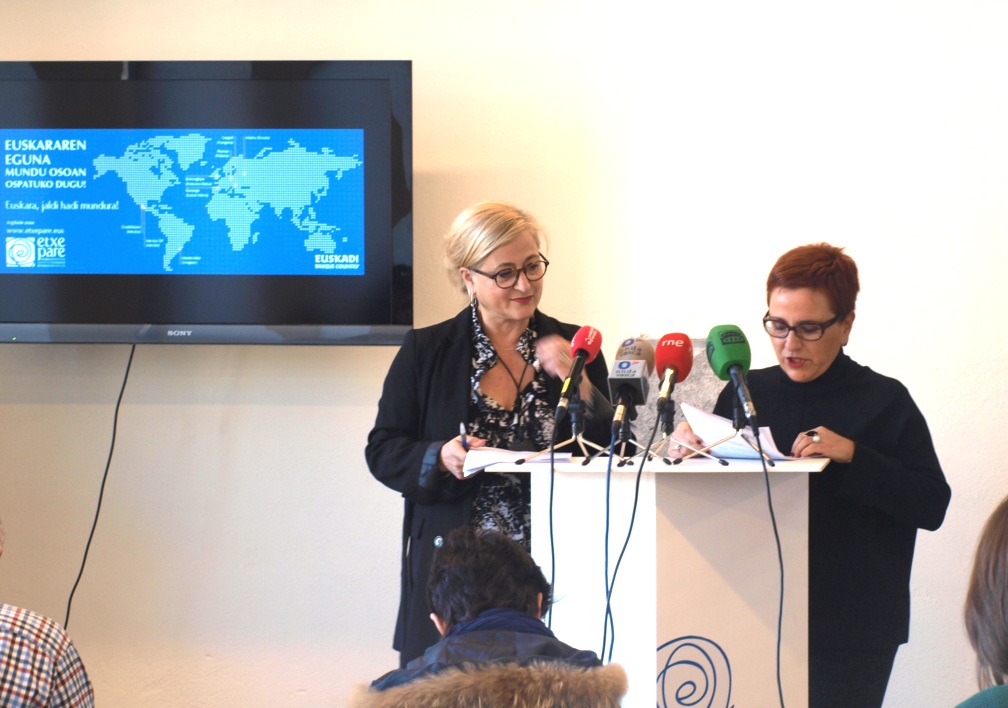 The beat of the Basque language can be intensely felt in any spot, in the hearts of those who learn our language worldwide. As Aizpea Goenaga, the Director of the Etxepare Basque Institute stated today in Donostia, on the present Basque Language Day –December 3-, the organization wants to recognize specially the effort of the teachers and students in the Institute network of Basque Language and Culture Lectureships in 34 universities of 17 countries. A network that, as noted by Mari Jose Olaziregi, Director for the Promotion and Dissemination of the Basque Language, has grown significantly over the past 5 years -since the Institute was created-: the number of agreements with universities has increased by 56%; and the number of students, 62%.

Thus, the Institute will celebrate internationally the Basque Language Day: Etxepare has organized or promoted 9  cultural programs in 7 different cities. Some of them have been organized by the lecturers of the Etxepare university network:  Moscow (Russia), Birmingham (United Kingdom), Szeged (Hungary) and Poznan (Poland) will host activities such as lectures, concerts, workshops, competitions or Basque film screenings.

At the FIL Book Fair in Guadalajara (Mexiko) and Mexico DF  the Institute has organized a number of initiatives to promote the Basque literature; the Basque writer Arantxa Urretabizkaia is already there, actually, working as a representative of our literature. In Montevideo (Uruguay),  the Cinemateca Uruguaya, Territorios y Fronteras, Zinebi  and Etxepare have organized and Exhibition of Basque Cinema, which will offer 8 feature films and 8 short films, all of them relevant in the last Basque film scene; there will also be an exhibition and a round table.

In Montevideo as well, the Basque Language Day will be celebrated with an extensive program launched by the Center for Basque Studies of Nevada, Reno, and  Euskal Erria Eusko Etxea, with the support of the Institute. Various conferences and book presentations are included in the academic program; no less prominent is the institutional schedule, with an official ceremony that will be attended, among others, by the former President of Uruguay, José Múgica.

The Institute will also bring to Euskal Herria a group of Polish editors and journalists,  who will have the chance to know more about the Donostia 2016 European Capital of Culture program, will visit several cultural centers and will spend a whole day at the Durangoko Azoka. They will get to know Basque writers and editors, through several  meetings and activities organized by Etxepare. This is not an isolated initiative. As Mari Jose Olaziregi explained today, the Institute fills a structural weakness of the Basque literary scene, concerning the lack of means for its internationalization. And all the Institute projects regarding the  Basque literature dissemination and the promotion of the translation of the Basque literature are a response to that need. During the very last three months, the Institute has organized 17 international activities with this aim in mind.