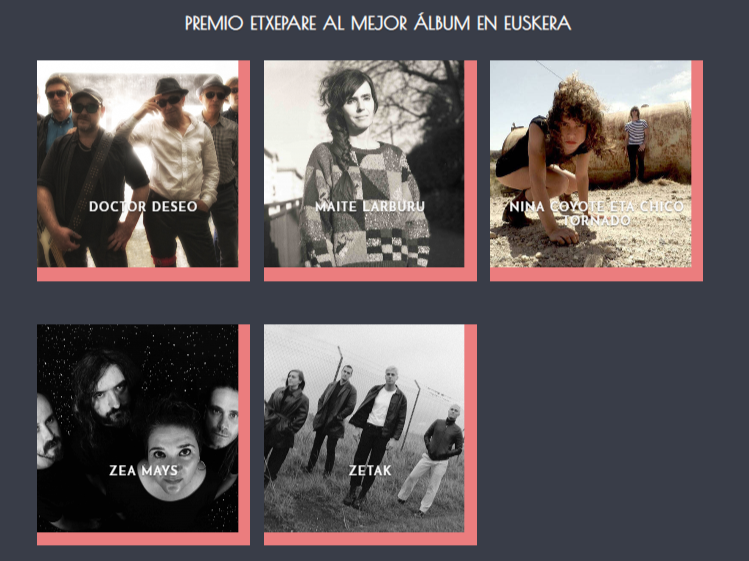 The finalists of each category in the 2020 MIN Awards for independent Spanish music were announced yesterday. At the ceremony to be held on March 11, the Etxepare Prize for Best Album in Basque will be decided among the following groups: Doctor Deseo, Maite Larburu, Niña Coyote eta Chico Tornado, Zea Mays and Zetak.

The jury of the MIN awards announced yesterday, in an open event held in the Costello hall, the five artists or groups in each category that have made to the final. The event consists of 19 categories, among which are the Fluge Award for Best Artist, the Ticketmaster Award for Best Live Performance or The Orchard Award for Best Album.

Few Basque groups and artists have been finalists in other categories apart from the best album in Basque this year. Among them, the Bilbao artist La Bien Querida stands out, who could win the award for Best Pop Album for her album Brujería. Besides, the Asturian artist Rodrigo Cuevas has been the one with the biggest amount nominations, six in total. He is followed by, among others, the rapper from Zaragoza Kase.O or the band Viva Suecia. In addition, the artist Kiko Veneno will receive the MIN Award of Honor for his entire career. More information about the nominations, here.

The awards will be given on Wednesday, March 11 at the Teatro Circo Price in Madrid. In the event, in addition to the awards ceremony, there will be live music, by artists Kiko Veneno, Viva Suecia, Ladilla Rusa, Zenet, Guitarricadelafuente, Cariño and Juancho Marqués.

You can listen to the latest works of the bands competing for the Award for the best album in Basque below: